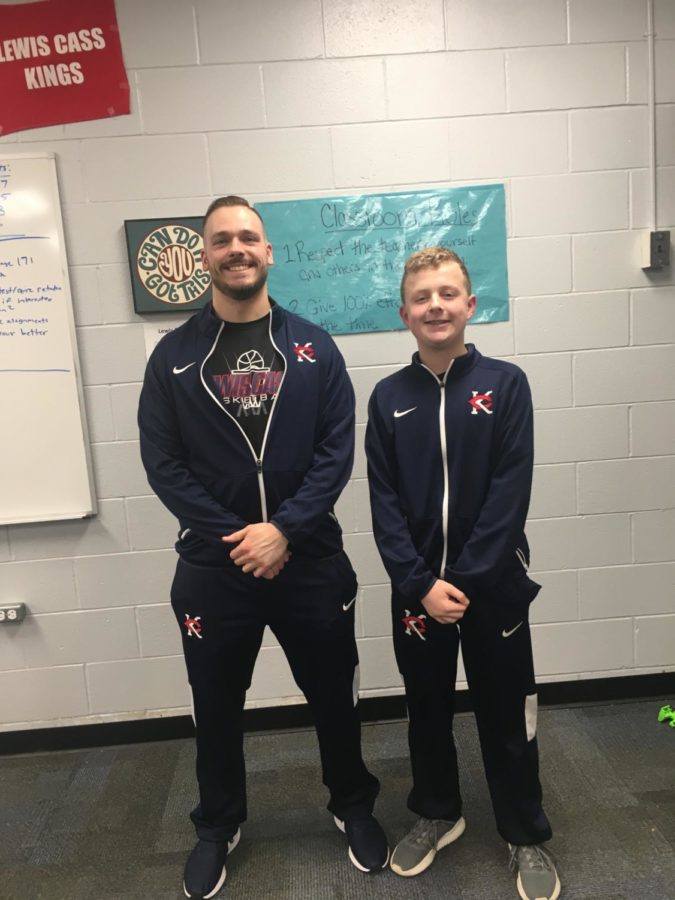 The Lewis Cass freshman boys’ basketball team has changed a lot this year and it all starts with the coach, Ethan Groff, a young man from Pioneer High School and a graduate from Wabash College. This is his first year as a head coach of a team and he is super excited to have the opportunity to coach his own team.

Coach Groff is a student of basketball. He is always trying to learn from other people. Coach Groff’s favorite coaches are his high school coach from Pioneer , Pat Skaggs, and former Los Angeles and Chicago Bulls head coach Phil Jackson. He has learned a lot from both of them but he said, “Coach Skaggs is my favorite coach of all time because he gave me a lot of opportunities and he gave me more knowledge about the game of basketball.” Coach Groff also said, “The only thing I can’t use from him is his offense and defense of strategy because the game has changed so much from when I graduated because how modern the game is now.” Coach Groff is a fan of Phil Jackson because how he controlled everyone’s personality and told people their role and how they are supposed to play that role correctly.

Coach Groff did not always know if he wanted to be a basketball coach.  He always liked helping people get better at basketball but did not know if he would be good at coaching.  He decided to give it a try and he loves it so far with the team and players he has. His main goal as a head coach is to get everyone better for junior varsity and varsity basketball in the next couple years of their basketball careers and to get wins. He always tells us to give 110% effort in everything we do as a team. Coach Groff is a competitor and he strives to win in everything he does.

He started playing basketball atf six years old but did not really enjoy it. His first interaction with basketball was at his local church league. Coach Groff did not love basketball that much at an young age, “I passed up an opportunity to watch Tim Duncan and David Robinson against  Alonzo Mourning.” At that time those three centers dominated basketball.

He started to love basketball when he turned seven years old and his parents bought him NBA Live 2001 for his family’s computer.  He found out his favorite team was the Los Angeles Lakers. Since he was so young, he only knew how to play with the Lakers and 76ers on his computer.  His father didn’t like how Allen Iverson promoted himself by his work ethic and how he said practice is worth nothing so he often picked the Lakers when he played on the computer.  He loved how Kobe Bryant could make any shot and he became his favorite player. Ever since he got that game, he has been playing basketball non stop.

Coach Groff  has taught my teammates and me a lot about basketball in our young season. He always has a positive attitude and that makes everyone a little bit happier when we are down or when we are having a bad practice by not making our shots, doing bad in plays, or just can’t do anything right. I hope he continues his coaching career at Lewis Cass because he is a big help for the basketball team and an amazing coach. I’m very excited to have Coach Groff as my coach because the season will be fun and I know we will have quite a few chances of winning before the season ends.