The Indianapolis Colts’ Season So Far 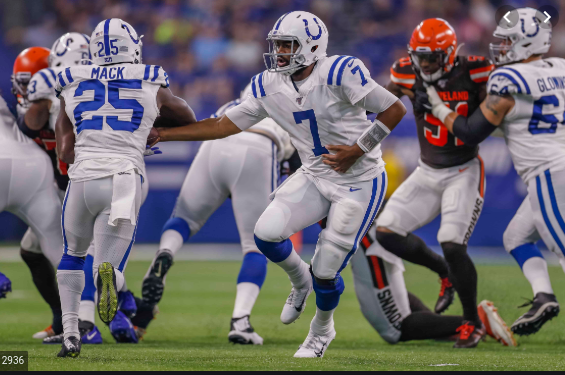 The Colts, after their win last night over the Kansas City Chiefs, are now the best team in the AFC South.  It was a tough game for the Colts since the Chiefs have Patrick Mahomes and LeSean McCoy.  The Colts have been good since Andrew Luck retired and now the quarterback is Jacoby Brissett.

First, Jacoby Brissett has been stepping up his game this year.  In the first game of the season against the Chargers, the Colts forced an overtime.  The Colts would not be victorious in overtime. Jacoby threw for 190 yards that game.  He would also throw two touchdowns with zero interceptions, but he did fumble the ball once.  A major factor that cost the Colts the game was Adam Vinatieri missed two field goals and an extra point.  If he would have made those, then Indianapolis would have won the game. In week two, the Colts would faced the Tennessee Titans and win that game 19-17.  Brissett threw for 146 yards this game with three touchdowns. He did throw one interception. He would rush nine times for 25 yards. In week three, Indianapolis defeated the Atlanta Falcons 27-24.  Jacoby Brissett threw for 310 yards. He had thrown three touchdowns. In week four, the Colts would lose to the Oakland Raiders 24-31. The Colts didn’t play horrible in the game. The defense could have done better.  Brissett had three touchdowns with 265 yards.

Next, T.Y. Hilton said about a month ago that this is his favorite Colts team in his career.  He thinks that even without Andrew Luck, they are the best Colts team since 2012. However, I don’t think this is the best Colts team.  I think that last year’s team was better since it had Luck and the offense and defense were great. The Colts also made it to the divisional round in the playoffs but lost to the Chiefs to end their season. Now, the Colts General Manager Chris Ballard has certainly made sure its the deepest.  Indy’s offensive line, starring Quenton Nelson, is one of the league’s best. The Colts also have the reigning Defensive Rookie of the Year in Darius Leonard and a young, promising secondary with Malik Hooker and Rock Ya-Sin.

The Colts played the Kansas City Chiefs at Kansas City on Sunday Night Football.  The Chiefs were undefeated and that  gave them some momentum after their narrow win over the Lions. Brissett had an outstanding game once again.  The defense was absolutely dominate this game.

In conclusion, the Colts have been doing great this year.  If they still had Andrew Luck, then they might have won the Super Bowl.  Jacoby Brissett as the starting quarterback hasn’t been horrible. He has been good in the first five weeks of the season.  The defense has been decent as well. I would say that Indianapolis has a good chance to be the best team in the AFC South. The only team that might beat us is Houston.  Jacksonville and Tennessee are bad.  The Texans have Desean Watson and DeAndre Hopkins.  Our defense needs to be good so we can stop Watson and Hopkins.  The Colts did defeat the Chiefs on Sunday night.  Brissett played an outstanding game. The defense also played amazing as well.  This should put the Colts at a good spot as a contender to go far in the playoffs.  I don’t know about the Super Bowl, but no one knows where the Colts will end up this season.  I have enjoyed watching the Colts this year. It would be awesome to see them win the Super Bowl in 2020.