September 1, 1939 was the start of World War II. For two years America was able to stay out of the war. America was the safe place in the world.Pearl Harbor was America’s largest naval base around the time of World War II. Pearl Harbor is located off the coast of Honolulu, Haeaii. On December 7, 1941 at 7:55 A.M., Japan released an unprovoked attack on Pearl Harbor. The bombs Japan dropped destroyed or damaged every American boat and plane in the area. 2,400 soldiers were killed with 1,200 more injured.

Beth Slinderland recounts the attack in a letter she wrote to her parents. She described the bombing as she heard and saw it happen. In the letter she says, “The guns began some time ago but I thought they were our own usual gun fire… went out to take a better look to discover all the smoke and just then great spouts of water began rising out of the ocean.” Beth was very worried after she saw this; her husband had left to go to Pearl Harbor earlier that morning for work. Beth was terrified that her husband wouldn’t return home. She stated the damage simply, “Then [the Japanese] got three battle ships and three cruisers, and some destroyers.” Luckily, her husband came home later that night, and much of the damage that was done was able to be repaired.

The events are Pearl Harbor had an effect on Anne Frank and her family as well. Mr. Otto Frank was trying to immigrate to America and had been since before the war started, but four days after Japan bombed Pearl Harbor Hitler declared war on America. Due to Hilter’s war declaration, the number of immigrants allowed from Germany were reduced greatly and all immigrants had to meet with an American immigration officer prior to immigrating. Due to the fact that the Franks had to go into hiding, they did not get to immigrate to America.

Because Japan decided to bomb Pearl Harbor, America was drug into the war, which we were trying to stay out of. Pearl Harbor was our most important and our largest naval base, and it was ruined along with thousands of injured and killed Americans. The bombing damaged many planes and ships, caused Hitler to declare war, and disabled the Franks to immigrate to America.

In conclusion, the events at Pearl Harbor on December 7, 1941 changed the history of World War II, America, and the Frank family. The bombing scared and worried many Americans including Beth Slingerland who was terrified her husband would not come home. If Japan wouldn’t have bombed Pearl Harbor, America would not have been involved in the war, Hitler would not have declared war on America, and the Franks would have been able to immigrate to America. Without the events at Pearl Harbor, the history of World War II and America would not be what it is today. 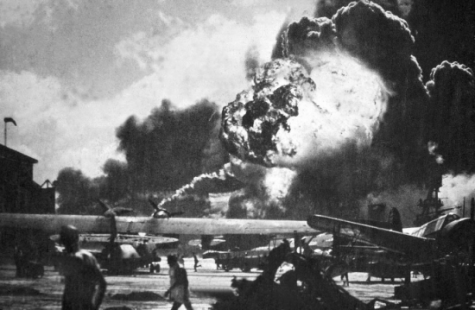