Donald Trump & COVID-19: A Match made in Hell 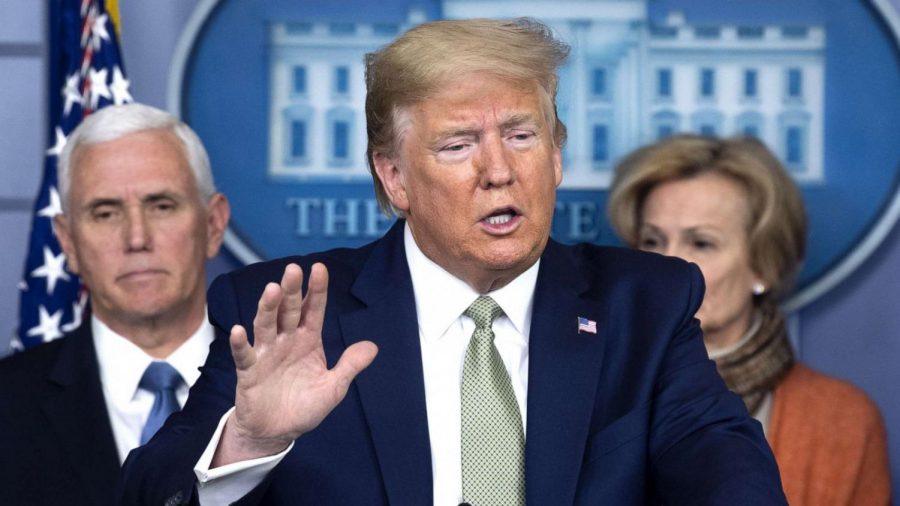 At the end of the decade, billions of folks around the world were looking forward to the empty promises that 2020 would bring. Needless to say, we all got our hopes up. Granted, no one expected this year to end up the way it did with, now infamous, COVID-19 tearing its way through the hopes, dreams, and lives of millions of people all over the globe. Not to mention the worldwide protests against racially charged police killings, 2020 has been one nightmarish fever dream that we all hopelessly wish to wake up from. We can´t, unfortunately, for this is the card we’ve been dealt by the omniscient hand of life and our only option is to roll with the punches. Questions still remain, however, as to who the higher-ups are and how they could have helped us normal folk lead safer lives, not riddled with fear and anxiety of our own neighbors. To answer this question, we have to divulge into the nasty, stinky, smelly world of US politics.

Politics is a hot-button integral part of our lives, even if we realize it or not. As of right now, the big names in the game are, of course, Joe Biden and Donald Trump. Today, however, we will be focusing on the latter, as his poor management and containment of COVID-19 has cost the lives of thousands of Americans across the country. Today, we will be looking into the facts and precautionary measures that Mr.Trump and his colleagues have blatantly disregarded throughout these hellish months. (DISCLAIMER: I understand and am not entirely oblivious to the Democratic side of this debate, as they too did not handle it the best way they should have during the first few months, but what matters is who is currently in charge of our country. That falls in the hands of Mr. Donald J. Trump and his administration, as they are in charge of calling the shots and deciding national mandates, being safe and positive influences, enforcing lock-downs, etc.)

To understand how we got here, we have to go back to the 2017 inauguration of President Trump. At that time, the White House´s National Security Council Directorate for Global Health Security and Bio-defense, which was established after the Ebola epidemic of 2014 to, according to The Washington Post, ¨do everything possible within the vast powers and resources of the U.S. government to prepare for the next disease outbreak and prevent it from becoming an epidemic or pandemic,¨ was still standing strong. It was only a year later when the White House dissolved the office under the Trump Administration, with many of the workers in that branch going to work on weapons of mass destruction (ironic). Now, I’m not saying that Mr. Trump said, ¨I want it gone¨ and, poof, it was gone. I’m saying that, throughout his presidency, Mr. Trump has fired many throughout the White House and replaced them with people who are in direct cahoots with him either financially or are just plain old pals of his. This isn’t the way to properly fill out an administrative board and bad decisions, like the one we just brought up, can easily be made without any checks or balances in place. Tis´ the way of such a corrupt and seedy environment, I suppose. The mentality seems to be, ¨Whatever Trump feels like, we can back it up because we have power. Power for which he has given us.¨ Funny how that works, isn’t it? Point is, if we still had the National Security Council Directorate for Global Health Security and Bio-defense, maybe we would have had a better road map to lead us down a path of safety, regulation, and order.

The fire-hose of falsehood is a term used by researchers during the height of the 2016 election to describe the tactic of, as a prominent member in politics, touting so many lies as the truth that the average citizen couldn’t possibly keep up with and fact-check all of them, so they begin to assume that everything said member touts is the truth without exception. It is a type of propaganda, and if we learned anything from the Red Scare, propaganda = bad. This ´fire-hose of falsehood´ was liberally used by Donald Trump during his initial presidential run and we can now see that this is the tactic he is falling back on during one of the most pivotal moments of our decade.

During the beginning of the outbreak, as it spread from Wuhan onward, Mr. Trump kept on spouting words of encouragement to the masses, which isn’t a bad thing. Leaders of countries should try to keep their citizens calm during times of panic, it only makes sense, but there is a certain level of precautionary measure that also has to go into it to keep your citizens safe. Mr. Trump, it seems, didn’t really care about the latter side of it. Instead, he sprayed his ´fire-hose of falsehood´ all over the place with claims such as:

¨…its something we have tremendous control over…¨ – March, > 6500 total cases

From those, which I got from NowThis News, we can discern that Trump was clearly A: not putting on a good image for citizens to follow regarding the wearing of masks, B: reassuring everyone that it was going to get better as it very quickly got worse, and C: sewing false promises of a vaccine coming very close, even though one still is not here, thousands of deaths later. The total cases of COVID-19 in the US right now is around 5,720,000. In a matter of months, since Trump told the populous that the virus was dying out, total cases in the US have doubled. All of this isn’t even mentioning the re-opening of the country on May 15th and students going back to school this August, both of which are objectively bad ways of dealing with a pandemic of this nature and both of which Trump very much so pressured his administration to enforce nationwide. What he says and does actively goes against what should be done by someone with as much power as him during these times. To the people who tune into his press briefings and follow his every word, this is dangerous behavior to be emulating. This type of behavior from a president is simply unacceptable.

Since there is far too much information to divulge into about this certain topic, and I can only go over so much before going mad, I feel as if I’ve gotten my point across. Again, I don’t want anybody to take this as tarnishing Donald Trump for no good reason; rather, it should be perceived as a critique of the botched handling/containment of COVID-19 by the people in charge coming from an understandably frustrated youth.