An Interview with Mr. Wilson

(about politics and the Internet) 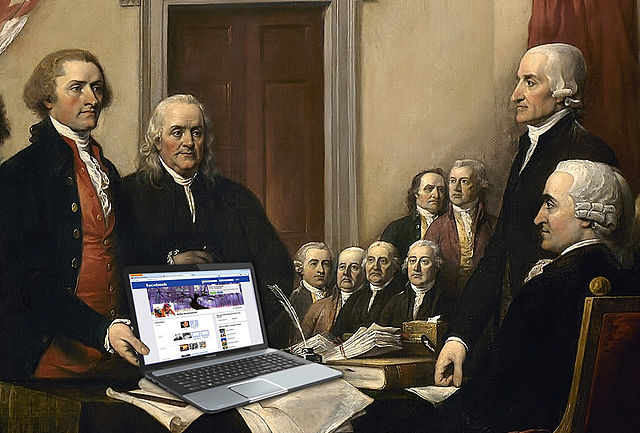 With the next big-time election right around the corner, let’s all celebrate with an educated interview with our very own historian Mr. Wilson about political scandals, the internet, and long-held mud-slinging tactics that we have held onto from Colonial America to the digital age.

P: Which political scandal do you believe is the most infamous?

W: For people that are still alive, probably Watergate. Just because, again, people (from that time) are still alive, but I mean, there’s always one. I think every generation has one. You can go all the way back to the John Adams and Thomas Jefferson era for the X Y Z Affair, you go to the Whiskey Ring around Ulysses S. Grant, you’ve got the Teapot Dome Scandal with Warren G. Harding and so on. Iran Contra with Reagan. So, each generation has its own (scandal). I think because of the fact that people are still around and Iran Contra was very convoluted, It would have to be Watergate for most people.

After hearing his answer, I wanted to see what he thought of the Lewinsky Scandal in comparison to Watergate.

P: Which do you think is more infamous, the Monica Lewinsky Scandal with Bill Clinton or Watergate with Richard Nixon?

W: I still think Watergate. Due to the fact that Watergate would have resulted in the removal of Nixon, I think it is everyone’s general assumption, it is that much more infamous, since we’re going down that road. I think most people recognized that the Clinton Lewinsky thing, while it was going to lead to impeachment, there was a 0 percent chance that the guy got removed from office. The economy was good and, basically, congress was going to bail him out. Him being Bill Clinton.

I couldn’t have said it better myself. One of the key differences between Watergate and the Lewinsky Scandal is, like Wilson said, that Watergate would have resulted in the direct impeachment and subsequent removal of Nixon from office. That would have happened if he had not resigned first. 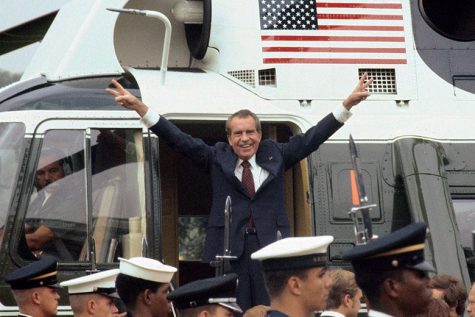 P: Which political scandal do you believe had the largest impact on the image of a president?

W: Probably the Lewinsky Scandal. I mean, Richard Nixon was always Richard Nixon, he was not a warm and fuzzy or likable human being. Whereas with Clinton, even though with modern politics being hyper partisan, I think a lot of people, you know, Clinton scandal; Did he lie under oath? Yes, but it was largely a moral conviction. I don’t think anyone is going to argue that he was in the right, but it was absolutely more of a moral issue than anything else. It’s an US vs THEM, your guy is a creeper kind of scenario.

P: So, the lying under oath with Bill Clinton, right? Complete polar opposite than with Grover Cleveland. Where, with the latter, he decided to tell the truth about his affair and he subsequently won the election. So do you believe that telling the truth in those types of political scandal situations would be more beneficial or less beneficial for the people involved?

W: Oh, for Clinton, he absolutely should have told the truth. He tried to pull a very lawyer-y lawyer´s dodge where he sort of notoriously started nitpicking the meaning of words. ¨What the definition of ´is´ is,¨ is the famous quote you get out of his deposition. The guy got caught and should have just point blank said, ¨yeah, ya got me,¨ and if that had been the case, not a great look, but you cannot legislate morality, so no harm no foul realistically. Yeah, he lied under oath, so game over on that regard.

After getting his opinion on the Lewinsky Scandal, I wanted to inquire about Iran Contra through a leading question, but I got more than what I had bargained for.

P: Which political scandal do you believe had the most potential to threaten national security?

P: Was Bay of Pigs Lyndon B. Johnson?

W: That was Kennedy.

W: So, Bay of Pigs. We basically got caught red-handed trying to eliminate, absolutely overthrow/assassinate a foreign country’s leader, being Fidel Castro. Even though I think no one was exactly lining up to say that Castro was a good guy, that’s a big no-no. The mentality is if we do it to them, then that means it’s fair game for everyone. Then the world descends into chaos. You can’t sit and say that the Bay of Pigs Invasion resulted in the Cuban Missile Crisis several months later, but it certainly didn’t help.

W: It’s one of the reasons, yes, that Cuba would turn to Russia and absolutely go with the protection angle, which ultimately leads to the placement of nuclear weapons in Cuba. You connect the dots from there, Bay of Pigs to the Cuban Missile Crisis, and like I said, while they are typically unrelated, they are very much linked because of fallout from the former.

Bay of Pigs Invasion into Cuban Missile Crisis isn’t what I asked for, but it’s definitely what my heart wanted. Next question.

P: How much of an impact do you feel the Internet has made in the world of politics?

W: A lot. It’s (the Internet) great if you’re actually going out there to engage in others of meaningful political debate, but that happens almost approximately never. It has all turned into a big echo chamber. Always the case with politics, even before the Internet, the republicans had their conventions and the democrats had theirs and they all patted themselves on the back, but the Internet, absolutely, has created a giant echo chamber where people only get reaffirming opinions and never look at the opposite. Both sides are guilty of it. I would love to sit here and tell you that it’s one or the other but absolutely both sides are guilty.

P: Do you believe the Internet has affected the way Americans view current political scandals?

W: Twenty four hour news cycles were bad, that sort of gave us the circus that surrounded Bill Clinton, but with the internet now literally being minute to minute, who can get the drop fastest so they can get the most clicks and web page views, nobody is watching. There is nobody vetting. There is nobody fact checking until after the fact, and fact checking is wonderful, except once the initial story is out, there is going to be a massive, massive percentage of the population that never goes back to fact checking anything. The first version of the story they hear is the gospel to them, and it will be forever, even if it is blatantly false. All the internet in the world but we focus on what we are given, which is problematic.

I mainly wanted him to make a point about how so many people nowadays are misinformed due to an abundance of news media, which he did, but he also made another great point about how nobody fact checks anything and why so many news outlets don’t even fact-check themselves. What a great answer to a simple question.

P: How do you feel about the term ´fake news´?

W: It’s real, but it’s also used in the complete opposite fashion as it should. It has been a sound byte that has been weaponized in order to simply deflect attention away from everything. Actual truth, controversy, doesn’t matter. Whatever you or your particular followers do not abide by, it is now just fake news. That’s not, obviously, the way things work. Facts are still facts, and just because you do not abide by those facts doesn’t mean there is a separate reality where they aren’t facts. After a while, personal opinion becomes personal delusion. It’s why, you know, despite popular opinion, not everyone’s opinion counts. If your opinion is based on craziness and conspiracy and conjecture and falsehoods, then no, I am not going to give your opinion the same weight as one who’s informed and actually trying to stick to facts and reality.

Time to relate this back to the Internet… 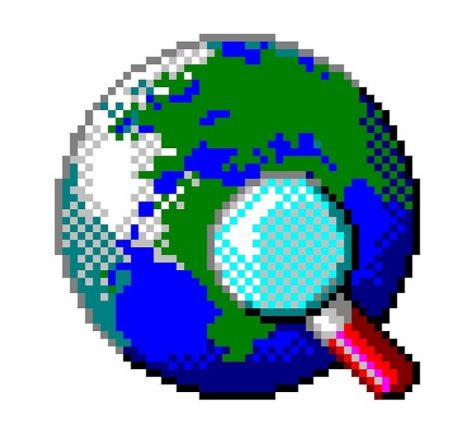 P: Do you believe that if the Internet had not been created, that the term ´fake news´ would have been made relevant in recent years?

W: Probably, but again, we’re trying to put the lid back on Pandora’s box. In the first question, with reference to John Adams and Thomas Jefferson, historians know that those guys engaged in mud-slinging and touting absolute falsehoods about each other during their campaigns. It is not recent. Now, the problem is the speed at which it happens. In the old days, lots of people heard lots of trash, but there was time in between A and B to clear it up and, at least, make an effort to set the record straight with fact and actual research and knowledgeable opinion. Today, we got one avalanche of both good and bad opinions and it’s just hard to counterbalance.

Mr. Wilson makes a great argument about how this behavior of not fact-checking and spewing falsehoods that could be misconstrued as the truth isn’t a new thing. We’ve been doing it since this country was founded. The only thing that has changed is ¨the speed at which it happens¨ with the Internet.

P: Do you think that the Internet has anything to do with why so many people are falsely informed about the politics of today?

W: You can (on the Internet) ignore any evidence to the contrary of any subject at hand, and go out and readily find dozens of sources that support whatever it is that you believe. Again, it is 2020 and we have people who actually believe that the earth is flat. And for every person that’s being a troll about it, there is someone that actually thinks this. That’s just sort of where we’re at. It’s that intense reassuring, reaffirming feedback loop of the echo chamber that is doing the real damage here, regardless of what the topic is.

P: Do you think that that is just a natural consequence of freedom of speech, freedom of press, and the Internet all existing at the same time?

W: Yes, because we’ve established that people had their echo chambers in the old days, but there were limits in place. Even in colonial times, Sam Adams was widely regarded as fairly annoying, even by the people he was around all the time. It’s why, back in that era, a very small percentage of the population subscribed to his personal beliefs. Then a guy like Thomas Paine had to come in and get everyone else on that train, because they weren’t going to listen to Sam Adams, he was the screaming, crazy person. Whereas now, you can get on the internet and the people who would be isolated, that single strange bird in a community, can find one another online with the push of a few buttons. That’s why I think it’s really amplified now.

Hopefully, through some not-so well thought out questions and some incredibly impressive answers, you learned a thing or two about how politics and the internet will now forever be intertwined. Pandora’s box, as Mr. Wilson referred to it, has been opened and the political scene has been changed forever. I can only pray that you will heed these simple instructions: Do your own research and don’t take any one article as the gospel. I’m sure Mr. Wilson could back me up on that, too.