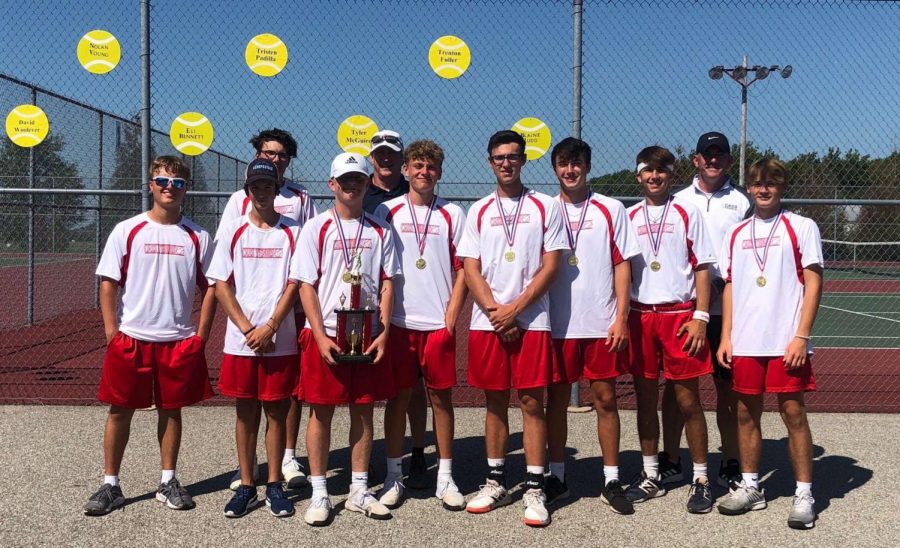 The Lewis Cass boys’ tennis season so far has been going great and just as we planned.  I would say the team is better this year than we were last season.  The varsity team has just about everyone from last season except with the new additions of Ethan Johnson, Blaine Rudd, and Byron Hurst.  The returning players on the varsity team are Jack Salyers, David Woolever, Jensen Burrous, and myself.  I have been happy with the way the season has been turning out so far.

First, the varsity squad this year is looking better than last year.  Our number one singles player is Jack Salyers and he has been running through the competition this year.  He played two singles last season and played excellent in that position.  Now it’s his turn to lead the team and be a role model to younger players on the JV team and even the junior high team.  I play number two singles this year.  So far the competition doesn’t feel that difficult.  I feel like I have been improving over the years so that makes me proud and happy.  My only struggles this year have been Twin Lakes, Delphi, and John Glenn.  The Twin Lakes guy I played was really good and his forearm was nasty.  So most of the match I was trying to keep it away from his forearm by hitting it to his backhand.  I think with the Delphi match I just had a bad night.  I was hitting many shots out and I couldn’t do anything offensively.  John Glenn’s tennis team is stacked with talent.  I had never even heard of the school until this year.  The guy I played had an amazing serve but I played the best I could.

Next, our doubles one team consists of David Woolever and Jensen Burrous.  Woolever was at the number one doubles last season so he already has experience with that top spot.  Burrous was number two doubles last year and he has been putting in great work during his first two years of playing tennis.  He has been a solid player so far during his time on the team.  He is out here carrying on his brother CJ’s legacy.  The doubles two team of Blaine Rudd and Byron Hurst has been quite the underrated duo.  Blaine just started playing tennis during his junior year and he has been a great player.  Bryon is just a freshman this year and he has been playing great as well.  Rudd is very good when it comes to playing at the net.  Hurst is a great player almost anywhere on the court.  I can assume that he is making his father and our coach Mr. Hurst very proud.

Furthermore, I believe that the team has been solid so far.  As of now, we have defeated the likes of Logansport, Eastern, Tippy Valley, La Porte, and Hamilton Heights.  I think everyone has improved so much since last year.  I think if someone were to put the boys team of last year against the boys team this year, the team of this year would win.  We have a conference tournament next week and the competition looks tough.  I can’t remember who’s all in it, but I know that West Lafayette is in it.  Their singles players are really good and it’s going to be hard for Jack, Ethan, and I to take down our opponents.  I think if we play our game, then we will have a good chance of winning the tournament.

In conclusion, I think our tennis team is talented this year.  Ethan is currently undefeated at singles three, Jack has been having great performances at number one singles, and I think I have been performing better than I did last year.  Woolever and Burrous are a very good team when they get things rolling.  David is very good at the net and Jensen can hit some nasty shots in both corners.  Rudd and Hurst have been overlooked in my opinion.  I think they deserve more credit for how great they have been playing this year.  Hopefully we end the season off on a good note and we can go far when it comes to sectionals.