Is Enola Holmes As Thrilling As Sherlock Holmes? 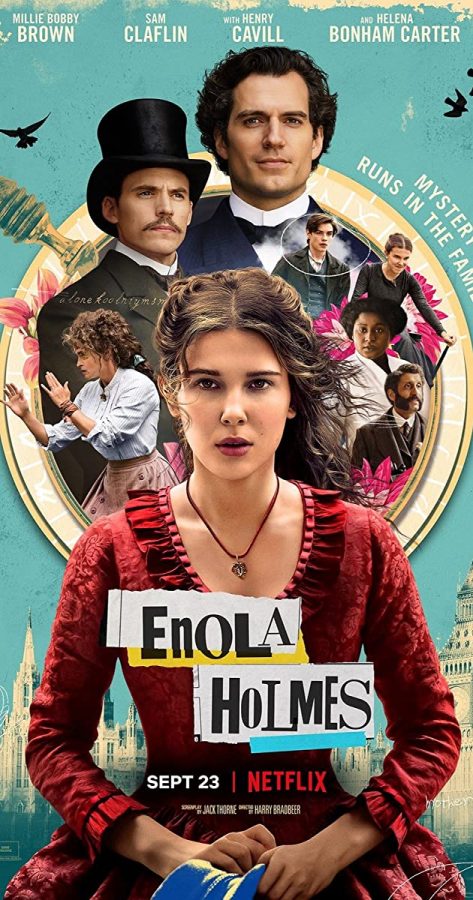 Most of us have heard about the fictional character Sherlock Holmes. Whether you are a devoted fan of the character or simply know him from mention, we all know that he’s an extraordinary detective. But did you know that Sherlock Holmes has a brother or even a sister? Here are my thoughts on the new Netflix movie Enola Holmes. Read at your own risk of spoilers.

I’m a fan of mysteries and Sherlock Holmes the TV show. I didn’t even know about this movie until my stepmom put it on one night. I didn’t finish the movie with her because I went to bed, but I ended up rewatching it with my friend. She had never seen the movie and was captivated by it within the first 5 minutes. The movie is styled a lot like Sherlock Holmes with Enola breaking the fourth wall and talking directly to the camera. Starring big names like Millie Bobby Brown and Helena Bonham Carter, here are just a few of my favorite moments from the movie.

The opening scene is Enola riding her bike on her way to collect her brothers from the train station. Enola Holmes is a brilliant 16-year-old who has been raised by her mother, Eudoria Holmes. That is until on the morning of her 16th birthday, her mother disappears. Her two older brothers, Mycroft and Sherlock, return home and they haven’t seen Enola in twelve years. I love the relationships shown between her mother and her brothers. Her mother is kind but firm with her, Mycroft is cold and hard, and Sherlock is almost indifferent to her as he is with his work, but he tries to make an effort to connect to her. Both brothers treat her differently than one another, with Mycroft he is angry that she isn’t what society would expect her to be while Sherlock almost laughs at him because he understands Enola’s mind rather than her need to conform to society.

For those of you who love romance, there are some moments in the movie like the Duke of Tewkesbury. Enola never planned to meet him or even get to know him, but she ends up saving his life. I love the banter that occurs between the two of them. Tewkesbury isn’t the brightest tool in the shed, but he has a good heart. Enola has always judged people based on their mind, but she learns to judge people by their heart as well because of Tewkesbury.

The ending is arguably one of the best and worst scenes. It’s the best because Enola finally is able to break free from Mycroft, and live her life how she wants to. She’s able to help break society’s view on women and somewhat reunite with her mother. It’s the worst because it’s the end of the movie. It’s the type of movie that you don’t want to end, or you want there to be another movie. It’s a two hour movie, but it doesn’t feel like it.

I’m not going to spoil the whole movie, but as soon as I finished watching it, I texted my stepmom and told her I wouldn’t mind a second movie. If you want to compare the movie from a ratings point, Sherlock Holmes the movie, rated at an average of 69% on Rotten Tomatoes while Enola Holmes came in at a 92% on Rotten Tomatoes. I would definitely recommend this movie to anyone and everyone. Based on my personal experience, it’s one of the best movies that I’ve seen this year. Even on the ratings, Enola Holmes has a 23% increase than Sherlock Holmes. If you don’t have Netflix, get with some friends who have it, and watch it. I didn’t think I would like it as much as I did, but I was pleasantly surprised, and I think you will be too. 5 out of 5 stars.