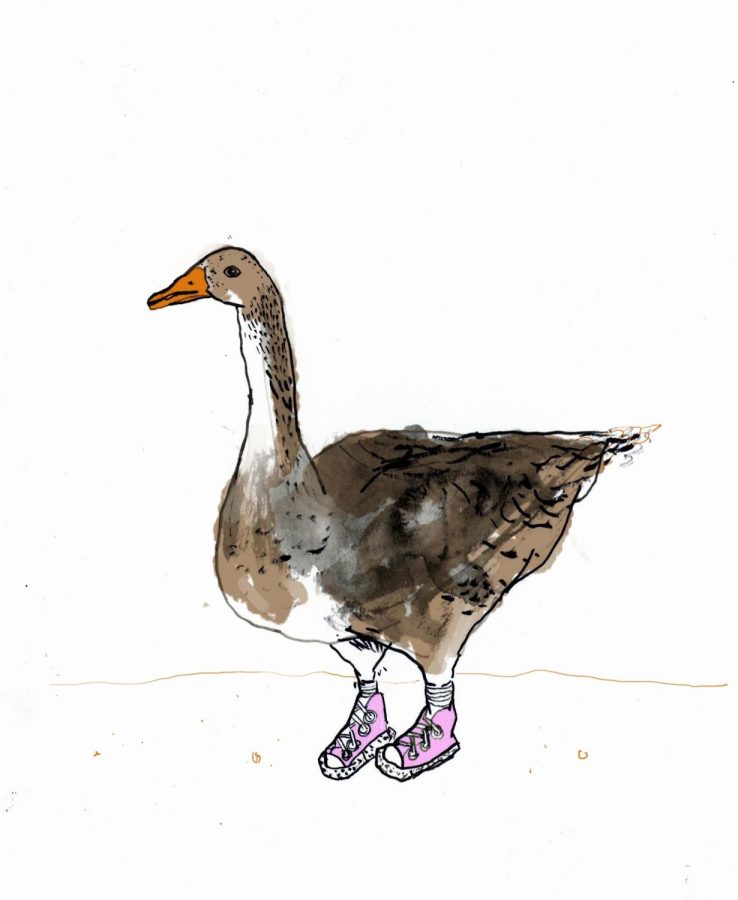 Andy the Goose was a goose born without feet that lived on a farm in Hastings, Nebraska in 1987. His lack of feet would lead to his rise in fame globally, something that neither he nor Gene Fleming, his future caretaker, wouldn’t realize until their fateful connection in 1988.

One day while visiting his sister-in-law’s farm in Nebraska, Gene Fleming spotted a goose with no feet, only stumps, attempting to catch up with his web-footed brothers to no avail. Gene would keep an eye on the goose he dubbed “Andy” for the next couple of days until he purchased a $13 pair of size 0 baby shoes that he would then fit onto the disabled goose with the help of foam rubber. Andy was not a fan of the shoes at first but eventually learned to walk and squawk wearing the shoes. Word spread around the Hastings area which would extend to the state and then the country and then the world, proving that a goose walking about in human-like shoes is something that everyone can get behind.

Andy the Goose quickly became a symbol of hope for disabled children around the world and was even sponsored by Nike, a fact that gets brought up a lot in discussions about Andy. In most publications of Andy the Goose, he wore Nike branded baby shoes, a brand that Gene Fleming told publishers, “…were the most comfortable on Andy.” This caught the attention of media consultants at Nike and prompted a sponsorship between the multi-million dollar producer and a bird with Nike sending Andy a crate of specially made prosthetic, Nike-branded shoes every month. Andy was, perhaps, the most known bird in the world during his life, only surpassed by cultural icons like Big Bird and Tweety. Some would argue that Andy had become a cultural icon during his days, too.

Even though Andy the Goose was globally recognized, cherished by his hometown, and sponsored by Nike themselves, he must have made an enemy during his publicity run in the late 80s. Andy the Goose was found dead in a local park in the autumn of 1991, his skinned body laid next to his own wings, head, and iconic Nike shoes. His carcass had not been mauled by dogs or shot by hunters, but rather showed signs of being a premeditated murder. A case was building.

The local community rounded up $10,000 dollars for any information on Andy’s murderer to no avail. Gene Fleming would later pass in 2000 to dementia, with testimony from his family detailing that Andy seemed, “…to keep him with us for much longer than he was supposed to.” Over 30 years later Andy’s killer still has not been found. The remaining family of Gene Fleming have stated that they do not seek prosecution in the murder of Andy but only wish to put the mystery to bed.

Andy the Goose will always be remembered as a symbol of hope for many people out there and, at the very least, remain as interesting as he was 30 years ago. After all, not many people have seen a goose wear Nikes.