Keeping up with Choir 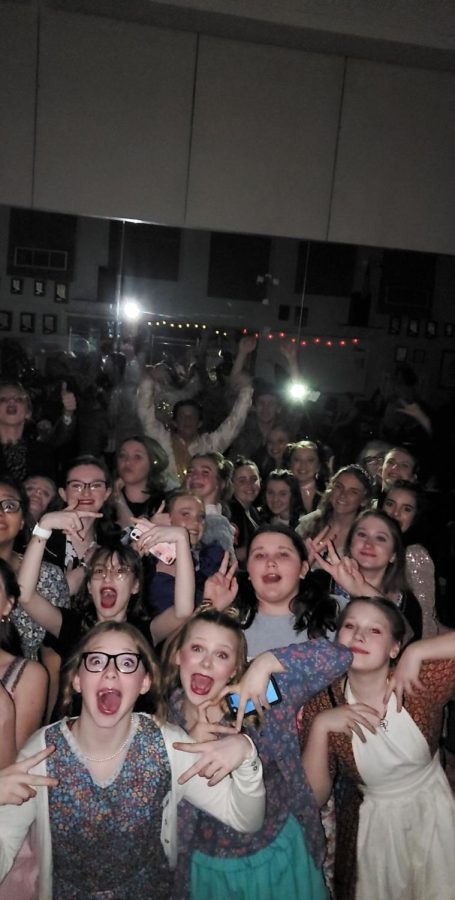 Every nine weeks I cover the choir concert, however this nine weeks there’s so much happening in choir that writing about just the concert wouldn’t scratch the surface. Choir is so much more than just concerts, and everyone should know that. This quarter we had ISSMA Solo and Ensemble, the “Celebrating Music” concert, and, performing last Friday and Saturday (March 11 and March 12), the musical “Into to the Woods”.

Those who performed at Solo and Ensemble did amazing. Many gold and silver medals were awarded, and those who went on to sing at state Solo and Ensemble didn’t disappoint. Almost all won golds and two songs got higher than gold. Kennedy Thorpe won a gold with distinction, and the boys barber shop got a gold with distinction and a perfect score. All of these singers sounded amazing and worked hard to get their placements. Congratulations to all who sang.

This quarter’s choir concert was a little different than normal concerts, as spring concerts usually are. The theme was celebrating music and that we did! There were many categories including praise songs, forgein languages, and many others. One of my favorites was the Chorale set. The junior high advanced choir’s performance of a show choir set was definitely not disappointing, as always. Their performances of “Popular”, “I See Stars”, and “Boomerang” definitely stole the attention of the crowd with ease, just as the boys’ barber shop did. The Collective boys, Preston Parker, Derek Landis, Jesse Morgan, Ian Hook, Brayden Pittman, and lead Elijah Martin definitely deserved their gold with distinction and perfect score. The boys sounded wonderful and were very entertaining. Of course these weren’t the only songs in the concert, and definitely weren’t the only songs that sounded wonderful. All students that participated sounded amazing, and I’m so happy to have performed with you all.

While both of these things were wonderful, the history made with Lewis Cass’s choir department was my favorite. Our rendition of “Into the Woods” was one for the books. We all worked so hard to make the musical look and sound marvelous, and I’m so proud of everyone that participated. Student directing for this musical was more than an honor, and watching everyone grow closer together as well as grow as performers and people was my favorite part. The musical was more than a success, and I hope all that participated feel the same. The cast was so fun to perform with and the energy that always filled the room will be unmatchable.

However, none of these things would be possible without the world’s best director Mrs. Dubois. She always pushes us to be the best versions of ourselves and the best performers that we can be. I’ve worked under many directors, but something about Mrs. Dubois’s concerts and shows feel magical. She’s the most talented and qualified director anyone could ask for, and we are so lucky to have her.

To summarize, the choir program has had a lot going on recently. First was Solo and Ensemble with wonderful results. Next was the concert with captivating and marvelous performances. And finally, the most magical musical with an unbelievably talented cast. But of course none of this would be possible without the best director, Mrs. Dubois.